Aims of the Federation

The International Federation of Comparative Endocrinological Societies (IFCES) is an umbrella organization whose primary function is to promote and advance research in comparative endocrinology, neuroendocrinology and neurobiology, and to facilitate the collaboration and exchange of ideas among scientists worldwide.

IFCES fosters the organization of international symposia, such as the International Congress of Comparative Endocrinology (ICCE), to occur normally on a quadrennial basis.  IFCES may undertake other activities, such as sponsorship of workshops or specialized symposia, as it deems appropriate.

It is with great sadness that we communicate the death on September 16th, 2021, of Professor Kazuyoshi Tsutsui, the President of the International Federation of Comparative Endocrinological Societies (IFCES). The untimely passing of Professor Tsutsui, a leading light in comparative endocrinology, is a great loss for our field and science in general. We have lost a leader of the field, a dedicated servant of science through his role in leadership of scientific societies and journal editorships as well as a generous and open collaborator, and a friend of many. 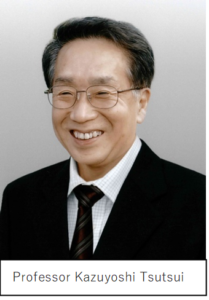 Professor Tsutsui was born on September 30th, 1952, in Hiroshima, Japan. He carried out his biology undergraduate degree and obtained a Doctor of Science (1981) under the supervision of Professor Susumu Ishii, from Waseda University, Tokyo, Japan. He subsequently extended his studies on quail reproduction, and more specifically the action of gonadotropins, to rats, mice, and hamster. However, he is perhaps best known for the work he carried out when he was a Professor of the Faculty of Integrated Arts and Sciences, Hiroshima University and the Director of the Centre for Integrative Brain Sciences at Hiroshima University (2000). It was during this time, when working on neuropeptides in the quail (1-4), that he discovered gonadotropin-inhibitory hormone (GnIH) in the quail hypothalamus and demonstrated its inhibitory effect on gonadotropin release from the quail pituitary (5). In the years following this seminal observation, he led the field in studies on the distribution and function of GnIH during  different phases of the lifecycle and in different animals (6-9).

Professor Tsutsui’s funeral was solemnly held in Hatsukaichi city, Hiroshima on September 18th, 2021.  We offer our sincere condolences to the family of Professor Tsutsui and honour his memory as a World leader in Comparative Endocrinology.

News on upcoming meetings and workshops