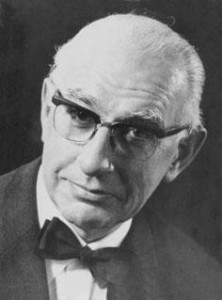 Professor Bargmann’s major contributions to neuroendocrinology include 1) the discovery of the neurosecretory pathway, revealing the full course of the hypothalamoneurohypophyseal tract by “Gomori” staining; 2) the identification of neurosecretory neurons in many vertebrates and invertebrates; and 3) after identifying synaptoid neurosecretory neurons on endocrine cells in the mammalian pars intermedia he coined the term “peptidergic neurons”. Professor Bargmann also made substantial contributions to our fundamental understanding of the islet cells of the pancreas, the ultrastructure of the placenta, the eosinophil leukocytes, milk secretion and the kidney.

Wolfgang Bargmann held numerous honorary positions during his career including being two-time President of the Scientific Commission of the German Science Council (1958-1964), President of the 8th World Congress of Anatomy (Wiesbaden 1960), Chairman of the Anatomical Society, and Senate Member of the Max Planck Society (1966-1972). Finally, among his numerous editorial activities, he served for 30 years as the editor-in-chief of Cell and Tissue Research.

Ernst Albert Scharrer (1905-65) was born in Munich, Germany. He received his MD and PhD degrees from the University of Munich. In Europe, he held positions at the University of Vienna, the Research Institute for Psychiatry in Munich, and was Director of the Neurological Institute of the University of Frankfurt. In the late 1930s, he emigrated to the United States with his wife, Berta Vogel Scharrer, as a Rockefeller Fellow. There, between 1940 and 1946, he was Assistant Professor of Anatomy at Western Reserve University School of Medicine, and Associate Professor of Anatomy at the School of Medicine, University of Colorado. In 1954, he became Professor and Chairman of the Department of Anatomy, Albert Einstein College of Medicine. He died on April 29th 1965 as a result of an accidental drowning.

Professor Scharrer was instrumental in establishing neuroendocrinology as a distinct field. He made seminal contributions to the subject of neurosecretion. On the basis of co-operative studies with Professor Wolfgang Bargmann and Dr. Berta Scharrer, he proposed that the neurosecretory cells of hypothalamic nuclei are the origin of neurohypophyseal hormones. Using a comparative approach ranging from invertebrates to man, Dr. Scharrer’s research was fundamental in establishing the general principles that define neuroendocrine systems.